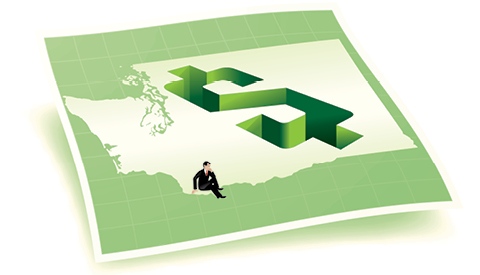 At the 2020 RPEC Convention, delegates approved the 2021 Legislative Priorities for the organization. These priorities included a provision to “Work in coalition with groups seeking to correct the regressive nature of Washington’s tax code”

Washington State has the most regressive tax code in the nation. This harms public sector-retirees and the state in several ways. According to the Washington State Budget & Policy Center, the average retiree pays seven times more of their income in state and local taxes than the wealthiest Washingtonians. This disparity is compounded by the fact that many retirees do not receive a yearly COLA on their pensions and have seen their Medicare premiums increase by over 70% in the last ten years.

RPEC members have sought to address issues such the lack of COLA’s and the need for additional support for medical costs but have frequently been told that there is not enough revenue in the state’s budget to cover the cost of those investments. This has especially been the case during economic downturns where sales and business tax revenue are disrupted.

It is essential for public-sector retirees to be a part of the discussion around fixing the upside-down nature of our state’s tax code. Legislators need to hear from their retired constituents about how the reliance on sales and property taxes to fund the important priorities of the state are harming the already modest retirement incomes of our members. In 2021, RPEC is supporting several bills that seek to help address the issues with the tax code.

SB 5096: which would enact a capital gains tax and is targeted to only impact the wealthiest Washingtonians (around 2% of households) and would raise over $1 billion dollars per year.

The tax would not apply to gains from the sale of single-family homes, small businesses, or investments from retirement accounts.

HB 1406: The bill would impose a 1% tax on intangible financial assets including publicly traded options, cash, futures contracts, and stocks and bonds in excess of $1 billion dollars. RPEC supports this bill because it would produce an estimated $2.25 billion in 2023 and $2.5 billion in 2024. An estimated 200 individuals statewide would be subject to this tax.