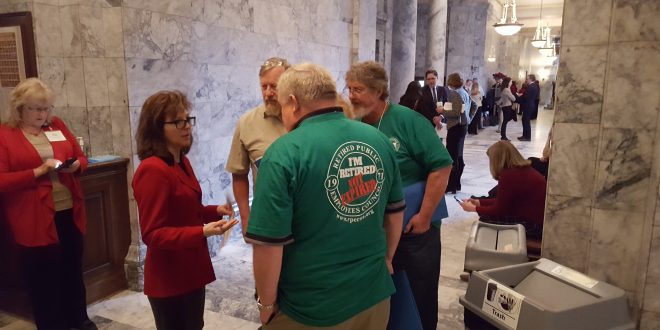 OVER 200 RETIREES VISIT WASHINGTON STATE LEGISLATORS AT THE CAPITOL

Over 200 Retirees Visit Washington State Legislators at the Capitol

OLYMPIA – On Wednesday, March 8th, over two hundred public sector retirees descended on the Capitol in Olympia to bring attention of the need to restore retiree benefits that the legislature cut during difficult financial times.

The number attending has doubled from last year because the financial pressures on retirees are mounting with the rising costs due to inflation, increasing health care costs and an overall loss of purchasing power due to the lack of cost of living adjustments.

Members of the Retired Public Employees Council of Washington (RPEC) and the Washington Education Association – Retired (WEA-Retired) met with their legislators to discuss issues affecting them – primarily the loss of the PERS/TRS Plan 1 Cost Of Living Adjustment, which the legislature took away in 2010. Out of the 18 public pension plans in Washington State, only two have no COLA protection for retirees to protect their standard of living from being continually eroded by inflation – PERS 1 and TRS 1.  They also addressed the Medicare premium subsidy of those insured under the Public Employees Benefits Board, which the legislature reduced from $182.50 to $150. To many retirees, that $32.50 reduction in their Medicare subsidy can mean the difference between affording much needed medications or paying bills.

“We are not trying to be greedy,” said Nancy Heley of Olympia, a PERS 1 member, “we are only asking the legislature for a bit of relief.”

Legislators heard the loud voice of their senior constituents, whose political power continues to grow as their population increases and they continue to vote in high numbers.  While they have retired, they are still a vital part of their local communities and economies. Many of the retirees are extremely active in local politics and are well known by their legislators. Local RPEC chapters routinely invite legislators to their monthly meetings to discuss issues affecting public sector retirees.