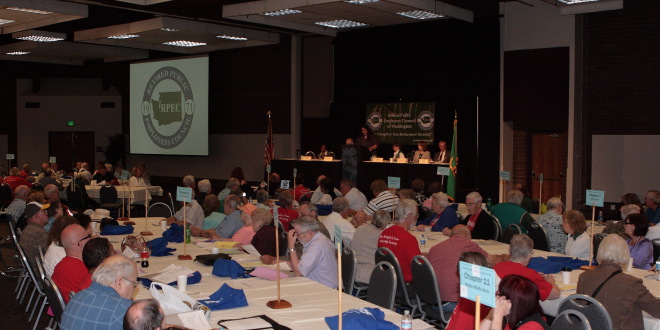 The 45th Annual Convention of the Retired Public Employees Council of Washington will be held at The Wenatchee Convention Center on September 27- 28, 2016.
121 N Wenatchee Ave, Wenatchee, WA 98801

INSTRUCTIONS FOR PAYMENT OF REGISTRATION FEES:

The convention registration fee for each delegate has been set at $120.00, as established by the RPEC Executive Committee. This includes a convention packet, and three meals – a lunch and a banquet on Tuesday, September 27th, and a breakfast on Wednesday, September 28th.

The goal is to have every chapter represented at the convention. If your chapter needs financial assistance, contact the Council office no later than May 27, 2016.

The Convention Registration Form accompanied by full payment of convention registration fees for delegates, alternates and guests should be sent to the council office no later than Friday, June 17, 2016. Alternates and Guests may either pay the full registration fee for a convention folder and meals, or they may purchase meal tickets only at a cost of $20.00 for the lunch, $36.00 for the banquet and $19.00 for the breakfast ($75.00 for all three meals). Special dietary needs can be accommodated provided we have advance notice.

Please note the deadline for payment of registration fees, individual meals, and any special dietary needs is June 17, 2016.

Requests for reservations are the responsibility of the delegates, alternates and guests attending the convention and must be made by calling The Coast Wenatchee Center Hotel.

Please follow these steps to reserve your room reservations.

Convention room rates are $99.00 plus tax and fees for single or double occupancy. All reservations must be received prior to Friday, August 26, 2015. The Hotel will accept reservations at the group rate until this cut-off date or until the block is filled.